Washington, D.C. – The tenth annual credit score survey, released today by the Consumer Federation of America (CFA) and VantageScore Solutions, LLC, shows that low-income households are most likely to apply for credit in the next 12 months.  Yet, the survey also reveals that these households generally know much less about credit scores than households with higher incomes.

The phone survey of 1,001 representative Americans showed that 20 percent of households with incomes below $25,000, but only 13 percent of those with incomes of at least $75,000, intended to apply for credit in the next 12 months.  At the same time, as the table below shows, these low-income consumers are far less likely than the high-income consumers to answer consumer knowledge questions correctly. 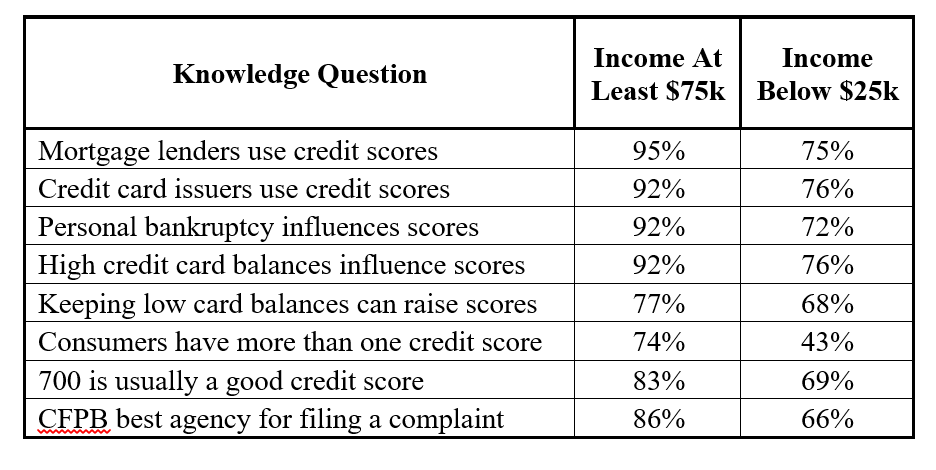 “At least one-quarter of low-income consumers lack the knowledge to help them raise low credit scores,” said Stephen Brobeck, a CFA Senior Fellow.  “This lack of awareness could limit their access to credit or subject them to higher costs.  Low income households can least afford to pay higher interest rates and fees associated with low credit scores,” he added.

This website uses cookies to improve your experience while you navigate through the website. Out of these cookies, the cookies that are categorized as necessary are stored on your browser as they are essential for the working of basic functionalities of the website. We also use third-party cookies that help us analyze and understand how you use this website. These cookies will be stored in your browser only with your consent. You also have the option to opt-out of these cookies. But opting out of some of these cookies may have an effect on your browsing experience.
Necessary Always Enabled
Necessary cookies are absolutely essential for the website to function properly. This category only includes cookies that ensures basic functionalities and security features of the website. These cookies do not store any personal information.
Non-necessary
Any cookies that may not be particularly necessary for the website to function and is used specifically to collect user personal data via analytics, ads, other embedded contents are termed as non-necessary cookies. It is mandatory to procure user consent prior to running these cookies on your website.
SAVE & ACCEPT
Generated by Feedzy